The Bostock Brothers: Free as a Bird

Inspired by their parents, John and Vicki Bostock, Ben, George and their brother Tom’s upbringing was surrounded by organic apple orchards. Their late mother, Vicki, had a love for animals and organics, which paved the way for the two brothers to start their own business venture, incorporating Vicki’s passions and dedicating their work to her memory.

When we showed up at Bostock Brothers, one of their family’s retired apple orchards, we had our car tyres washed with disinfectant to prevent outside contamination. Immediately, you could tell that their chicken operation adhered to organic-certified standards, which was a great indication of how Ben and George strive to be the best in the industry. 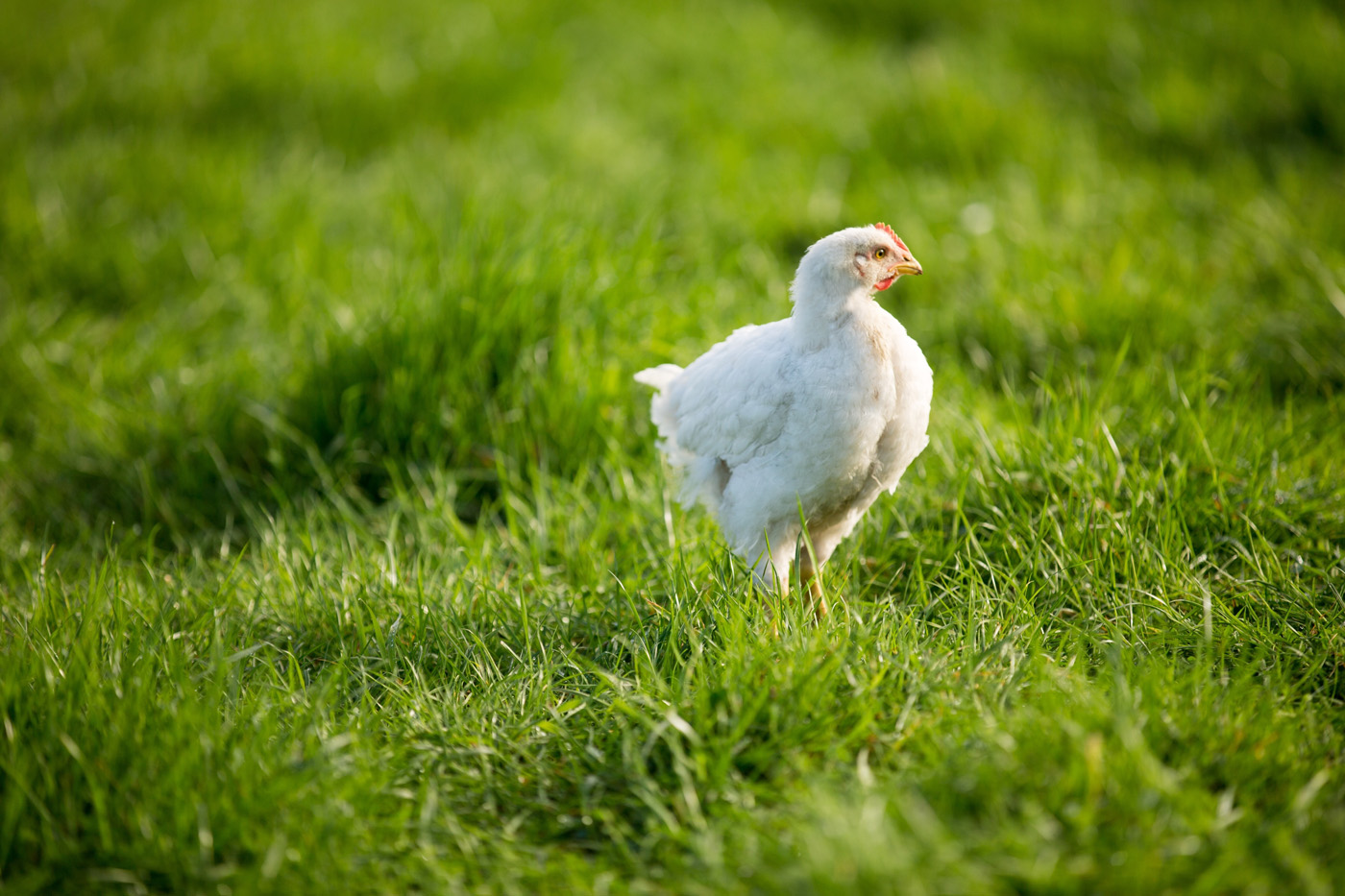 Bostock Brothers is the only organic chicken producer in New Zealand, raising their chickens longer than any other conventional free-range chicken farm. They pride themselves on their unique outlook: how to properly care for chickens and provide them with a happier life. They never want to be seen as a mass-produced business because their family instilled in them the importance of organic produce, and even though it may be a more challenging path, it’s a rewarding one that doesn’t compromise their ethics.

John and Vicki converted their Hawke’s Bay conventional apple orchards to organic in 1996 after a customer in the United States was seeking organic apples. They looked at ways of growing apples that were free of chemicals or pesticides, and the family have spent the last 26 years growing a very successful operation, being New Zealand’s largest organic apple producer. Ben and George’s younger brother, Tom, also works for the family business across their father’s apple orchards. The apple trees at Bostock Brothers are no longer used as a commercial orchard, but they still produce a fruitful amount of apples that are a healthy snack for the chickens. 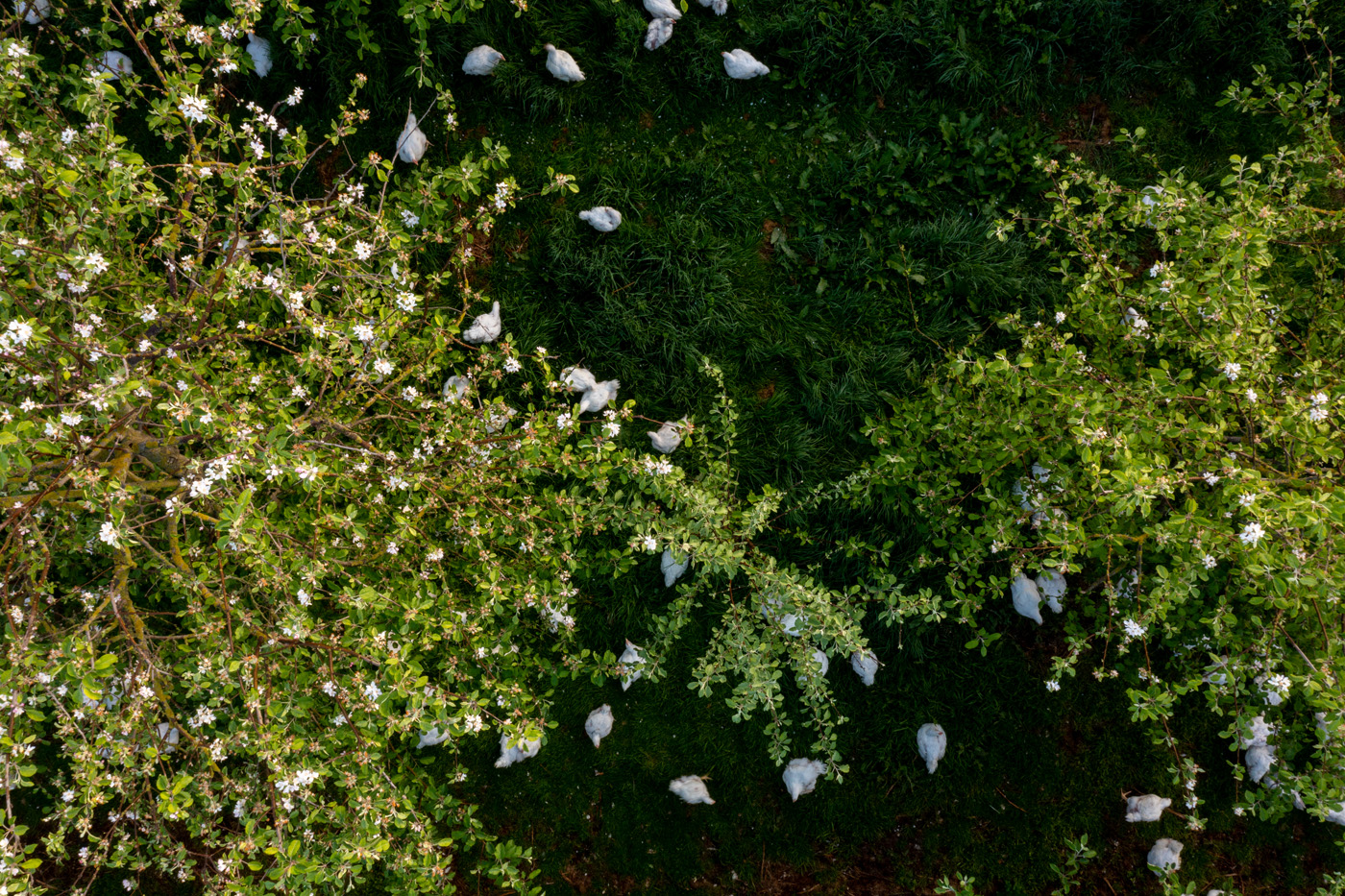 Bostock Brothers acquired around 30 hectares in total for their chickens. They have 18 chalets, and next door on a 100-hectare block, they grow maize and corn for their chickens which is then taken and dispensed from large automatic feeders. They also provide mobile sheds that they use when the chickens require fresh grass. Their chickens rotate between sheds depending on their ages, and have full access to an expansive outdoor area where they can be seen foraging for bugs, fallen apples, fresh grass and corn maize. Bostock Brothers house the maximum amount of chickens that are required under organic standards, which is about three times less than non-organic accredited producers.

“An afternoon when we were researching, we realised that a lot of the free-range farms might have 70,000 chickens in the sheds, and we thought that’s not going to be acceptable in the backyard of our parent’s house. So, we looked at the organic standard and how strict the rules were with the flock sizes, and that fitted more with what we wanted to do and our ethics,” Ben said. 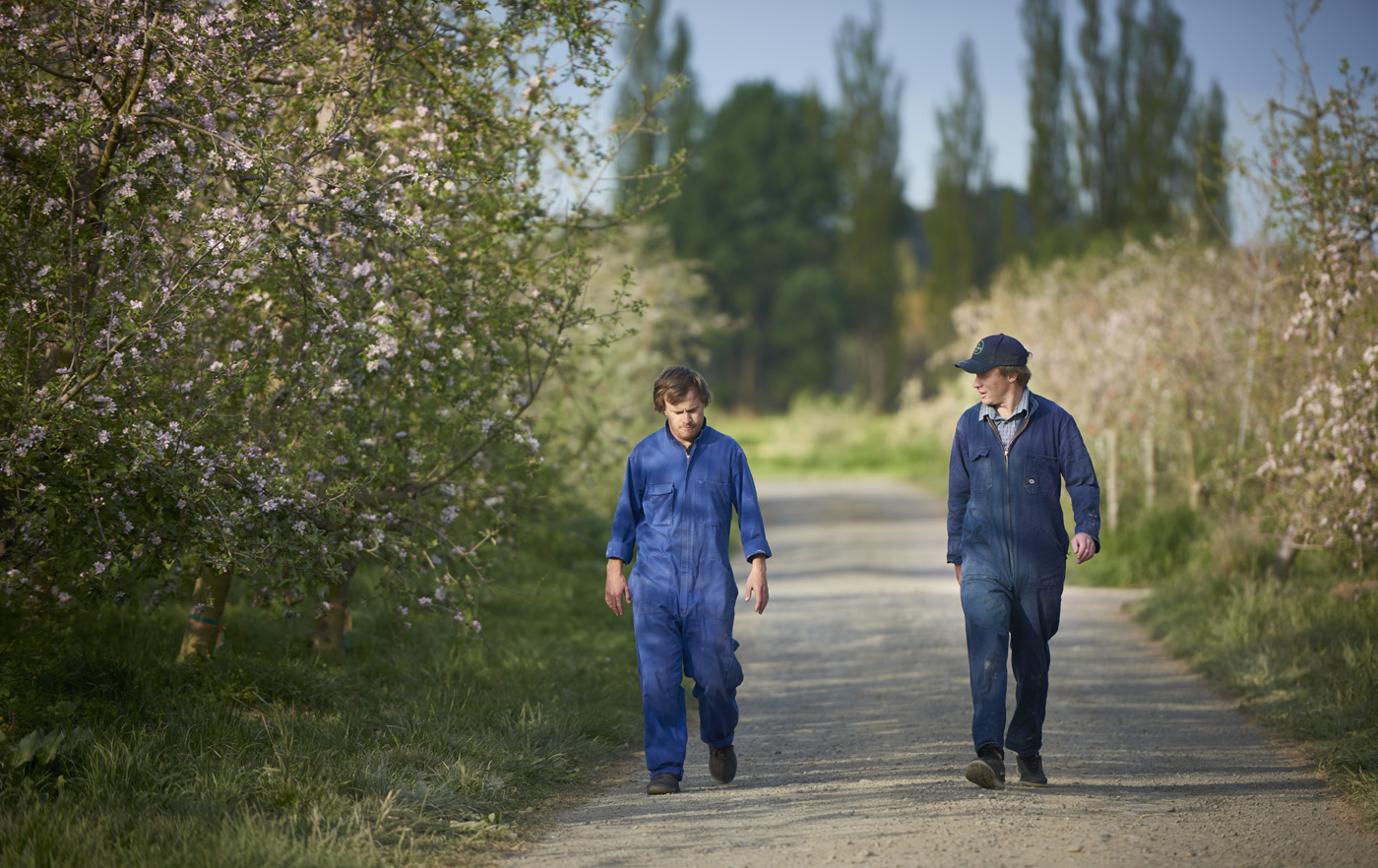 The vision of Bostock Brothers was developed when Ben worked in the meat trade in Auckland and saw the limited control that farmers had in the supply chain. Ben wanted to find a meat product where he could have full control over the entire process, from beginning to end consumer, and chicken was the most sensible choice. Due to little support from the New Zealand chicken industry, Ben decided to travel to the United States to do his own research and learn more about organic chicken production. Drawing from the knowledge that he acquired, Ben started the business in 2014 and four years later, George jumped in to give him a hand. The two of them oversee the whole operation, utilising their different strengths – Ben focusing on farm management and production and George looking after retail sales and their customers.

Across the business, Bostock Brothers has 60 full-time staff spread across their office, chicken farm and factory. Many New Zealand chicken producers bathe their chicken in chlorinated water to remove bacteria. This process has been banned in the European Union (EU) since 1997 due to food safety concerns. Bostock Brothers, being a reputable and non-conventional farm, air chills their chickens to remove bacteria, remain chlorine-free and produce tender, succulent meat full of the finest flavours. This is a lengthier process but that’s one of the perks of being a small chicken operation.

“People are becoming much more aware about where their food comes from, both from an ethical and health point of view, and I feel that we provide a product with full transparency that is raised ethically and is better for your health,” George said. 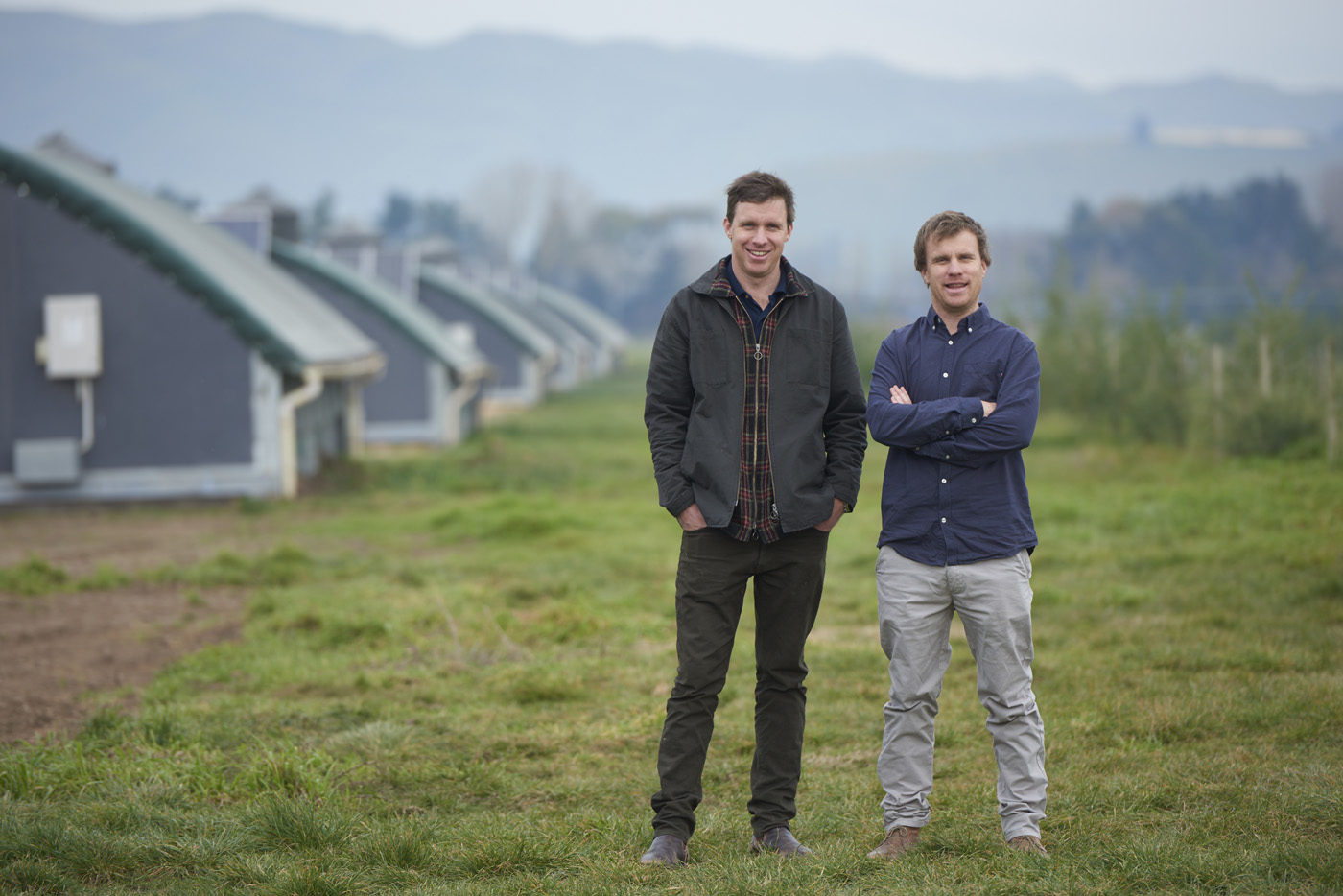 Along with their organic, free-range chicken which uses no chemicals, antibiotics, hormones and genetic modification, Bostock Brothers were one of the first New Zealand meat producers to provide plant-based home compostable packaging. This inspired other meat producers to start using green packaging as a result of their efforts. There were some technical issues with the durability of their packaging, so plant-based materials are only supported by some of their products. With the right composting facilities, the packaging can be broken down within six weeks or Bostock Brothers’ customers can return their packaging to ensure that it is composted successfully.

Bostock Brothers have also partnered with BioRich, an organic waste recycling company, which captures organic matter that would otherwise go to waste or result in pollution. BioRich converts this waste into rich compost that is distributed across the cropping side of their property. Ben and George grow 100% of their feed (maize, corn and barley) that is fed to the chickens, creating a sustainable business model that is better for the environment.

“Sustainability means doing something that we can just keep doing forever and ever, putting in what we take out, and doing something that doesn’t degrade the planet,” Ben said. “Everything we do has a focus on protecting the environment for future generations to come. We are always looking at ways to reduce our environmental impact; this is a key focus for Bostock Brothers,” George added. 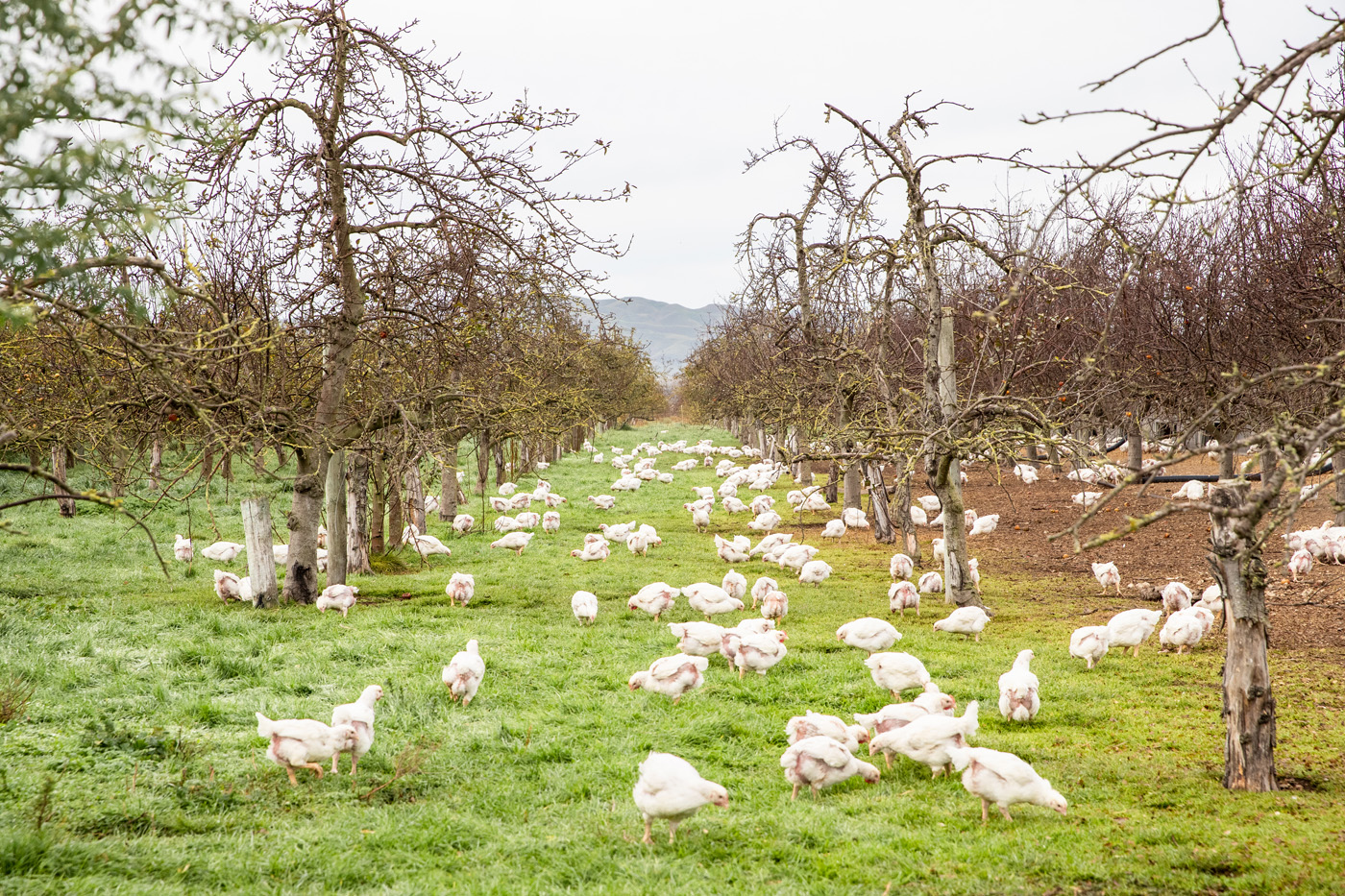 The Bostock family purchase their fencing supplies from Goldpine and they’re used throughout their apple orchards and chicken farm. They deal with Goldpine Hastings where they are provided with a range of fence posts and battens. “I find the quality of the products fantastic – they go in the ground and stay in the ground,” Ben said.

When the brothers aren’t busy producing free-range chickens, Ben likes to head out surfing, skiing or snowboarding and in his words, “having a good time”. George, on the other hand, has his pilot licence, so he enjoys flying, fishing and spending time with his partner and new puppy.

The goal by the end of this year is to be Toitū carbonzero certified as they are committed to farming sustainably and reducing their environmental footprint. With consumers becoming more aware of where their food is coming from, this is the perfect time for Bostock Brothers to continue perfecting what they are doing: providing their chickens with a happy environment and producing high-quality organic products that are not only tasty but are a cleaner and safer option, full of nutrients and vitamins.

The Bostock Brothers
Previous Next